Ардуиныч
In this video I show you how to make any size custom wireless keyboard using any Arduino micro controller board. It's a perfect Arduino project! Here, the Attiny84 is used with the nRF24L01 radio module. You can also 3D print a case for it, or use the one I created. In this project, first we start by creating a prototype keyboard using a breadboard, then show you an idea of how you can combine the Arduino micro controllers with all the wiring and buttons to make a complete custom wireless Arduino based keyboard.

Comment below on what project you want me to do next! It could really be anything!

I made sure the keyboard draws the least amount of current by using an Attiny micro-controller and the nRF24L01 module. At the end, the total current consumption was 1.284 mA, which meant the keyboard can last for 16 days using a single coin battery, the CR2450. However, this is assuming the keyboard is on 24/7, but in practise, the keyboard, like any other wireless device, will be turned off when not in use, for example before going to bed. So a more realistic value will be that the wireless Arduino keyboard will last approximately 30 days.

This arduino custom wireless keyboard was setup using a transmitter and a receiver. With the receiver micro-controller always connected to the computer, so it doesn't really matter which is used, but I have used the Pro Micro. For the transmitter, we need a micro-controller that has low current consumption, so the Attiny micro controllers work great for this kind of project. I have chosen the Attiny84 for the breadboard prototype version, and the Attiny88 for the final version for the 3D printed case.

Components required for the project:
- Attiny84/85/88 (or any low current consuming MC).
- nRF24L01, two of them.
- Pro micro, or any micro-controller with HID support to act like the receiver.
- Some buttons, any, I have used linear Cherry MX switches.
- CR2450 coin battery, and its battery holder.
- A 3.3v voltage regulator, I have used the MCP1700.

To design all the 3D models I used Fusion 360, and printed them using the Creality CR6 SE 3D printer.

Remember to Subscribe! :) I have over 50 amazing projects planned!
Link to the code and 3D models:
https://github.com/ProjectsWithRed/wireless_keyboard 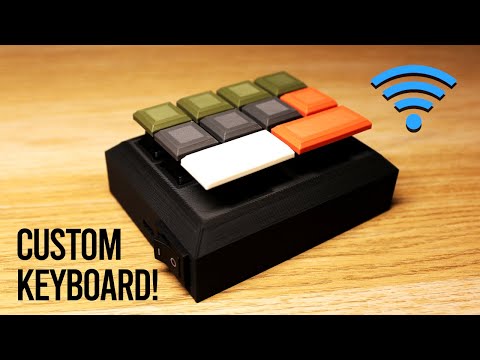 In this video I show you how to make any size custom wireless keyboard using any Arduino micro controller board. It's a perfect Arduino project! Here,...