Ардуиныч
The long awaited Arduino RP2040 is now available. This is the first Arduino based around the microcontroller used in the Raspberry Pi Pico. It’s officially known as the Arduino Nano RP2040 connect, as it is based around the Arduino Nano form factor and includes network connectivity such as wifi through the Ublox Nino-W102. The networking uses the ESP32 microcontroller which I used in my previous video:
https://youtu.be/pcHKTOd7cRg

The Arduino Nano RP2040 Connect is significantly more expensive than the Raspberry Pi Pico and some other boards based around the RP2040, but it is packed with features including:
Wi-Fi and Bluetooth BLE through NINO-W1020 (ESP32 based)
16Mb of SPI RAM
Microphone
Accelerometer
built in RGB LED
and more…

In this video I go through an unboxing of the Arduino RP2040 connect. I then compare it’s size and features against other RP2040 boards (including the Raspberry Pi Pico and the Pimoroni Tiny 2040), as well as other Arduino boards (including an Arduino UNO Wifi and a Arduino MKR 1010 Wifi).

After doing that you can connect the Arduino Nano RP2040 Connect and install the blink code.

It also shows how you can set the Arduino RP2040 as a wireless access point with a web server which can then control the RGB led on the board. This has all been done in C/C++ as the MicroPython version is not yet available for the Arduino RP2040. According to their website Python support should be available from July 2021.

It’s a similar story for Arduino IoT Cloud which will be fully supported in future.

This is just a quick introduction to the Arduino Nano RP2040 Connect and I hope to explore this little microcontroller board again in future. If you are interested in Arduino, RP2040 (including the Pico) or Raspberry Pi please consider subscribing to my channel to find out about future videos.

For more details see my web page on the Arduino RP2040 at:
http://www.penguintutor.com/electronics/arduino-rp2040 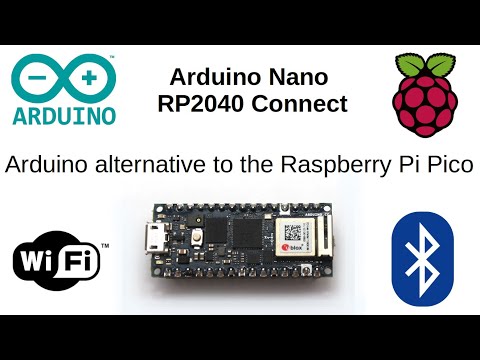 The long awaited Arduino RP2040 is now available. This is the first Arduino based around the microcontroller used in the Raspberry Pi Pico. It’s offic...