Ардуиныч
Here we are going to be building a DIY Remote Controlled Tank using Arduino. We will be providing you with complete instructions including the schematics, PCB design and complete code, and the explanation to make one yourself.

We will receive the signals from the remote controller, process them, and then use them to control the robot the way we want.

Here is the link to the remote controller video -
Make sure you check it out.

The first job is to get a robot chassis that will be fit for this purpose. I found this tracked robot chassis online in Banggood. Unlike other robots that we have built earlier, this one has tracked wheels that enable this remote-controlled tank to go over different kinds of terrain. Also, this robot has a spring suspension for all the wheels that will allow the front plate of the robot to change its position to move over obstacles.

The next step is to design a circuit for the Arduino Tank where we can connect the major components like the microcontroller, HC12 wireless module, and l293d motor driver IC.

Once we have done that, we will create a PCB and then Assemble everything to it.

After that, we will start coding. We will have to write a code to receive data from the HC12 wireless module, split the single line into variables, and then use them to control the RC Tank.

After that, you can upload the code to your microcontroller and power on the entire robot. There you have it - A DIY Remote Controlled Tank using Arduino. 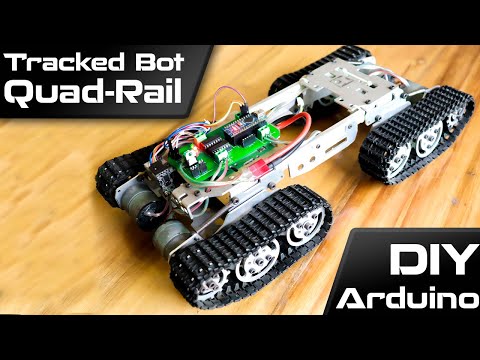 Here we are going to be building a DIY Remote Controlled Tank using Arduino. We will be providing you with complete instructions including the schemat...