Arduino Ultrasonic Radar (It can detect multiple objects with each ping)

Ардуиныч
This radar can detect objects located at distances between 2 cm and 1 meter and displays the value of distance to the object. The object detection is performed inside an angle of 180 degrees. The motion sensor that covers this angle uses a stepper motor. Data are presented on a PC monitor, the motor movement being synchronized with the browsing of the radar screen.
With a small modification of the ultrasonic sensor module, this radar is capable of detecting multiple objects with each ping, which means that it can also detect an object behind an obstacle. Points on the radar display, representing primary objects are displayed in red, and points representing secondary objects are displayed in blue.
Device is very simple to build and consist only a few components:

Arduino data is sent to the personal computer via USB. The received signals are processed in the Processing program which generates a nice graphical user interface in the form of Radar. A microswitch is necessary as it is not possible to rotate the stepper motor by hand due to its internal gearing. The azimuth and distance of each primary feature are shown in red. Any echo from a secondary object is displayed in blue. Without changing the sensor, you will only see red objects. More distant objects require more surface area since most of the acoustic energy is lost as the beam propagates, plus back echo also propagates.
First we turn on the power supply and the radar is set to its initial position by means of the microswitch. Then through the USB cable we connect the radar with the Processing program of the PC. Now we start the Processing code and the Radar starts scanning.

Instructions, schematic and Code at:
https://create.arduino.cc/projecthub/mircemk/ultrasonic-radar-it-can-detect-multiple-objects-at-each-ping-7a0f26

Arduino Ultrasonic Radar (It can detect multiple objects with each ping) 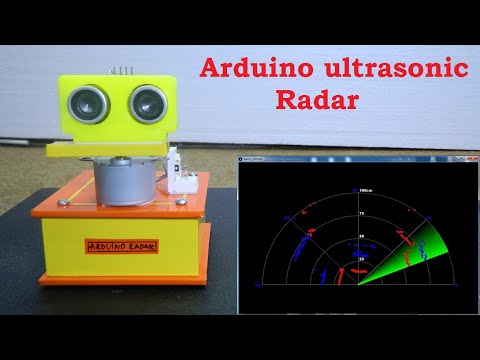 This radar can detect objects located at distances between 2 cm and 1 meter and displays the value of distance to the object. The object detection is ...