Differences compared with FarmBeats:
* it is cheaper at half the cost
* It can be built totally by younger students using the Arduino IDE and software libraries starting off with just one sensor and one actuator
* it is easier to fault find
* it can be ported to more powerful and robust computers such as the M5Tough.

I have already added Grove LoRaWAN E5 modules to computers like microbit and Arduino and have evaluated a whole range of sensors from pH, aiar quality,PM2.5, methane, oxygen, carbon dioxide, water turbidity etc. All of these are on the Grove platform and some already have Arduino Libraries available.

My future IoT version will add microbit radio, LoRaWAN MQTT technology via wifi with a microbit router feeding the FarmsBeat spreadsheet on a PC. Most of this has already been completed.

I have also used a couple of images to the presentation for impact and I wish to acknowledge them. They include:
Image Credits
* Robustness Enhances Lab Optimization Analysis Processes – Part 1
Western Australia’s First Demonstration Smart Farm
* ESG and the cost of capital
* A Growing Presence on the Farm: Robots - The New York Times
* Maker culture is critical to innovation, for more reasons than you think - campaign 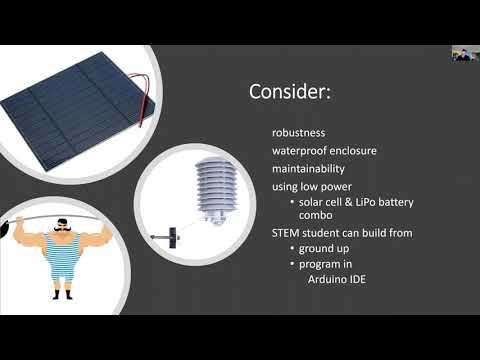 In this project I am replacing the Microsoft FarmBeats for Students kit with an Arduino version which I called Arduino Garden Kit. Here I use the same...